To have a daily painting emailed to you every day, please enter your address below. 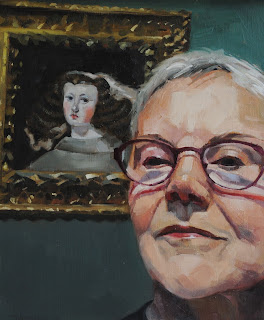 I went to the Meadows Museum in Dallas to see the Velazquez show. There were only a few paintings,  I think the show specified they were early court paintings.  The jewel of the show was the Phillip IV, I'm not certain of his number, and he was painted when Velazquez was 24 years old.  When I compared those early paintings with what I know of V.'s later ones, I could see and understand the difference.  The early paintings, although beautiful and ambitious, were without the poetry and breath of the later ones. I did turn a corner though and stumble on my friend, Queen Marianna, and so I got a little shot of the two of us.
Posted by Jean Townsend at 2:32 PM

Jean Townsend
Los Angeles, California, United States
My painting life has gradually shifted from abstract expressionism to realism, and in February, 2010 I began this daily painting art blog. The object has been to sharpen my skills and loosen up, also to have some fun exploring new ideas and subject matter. I welcome your comments and suggestions. There is more and different work on my web site, jeantownsend.com. Thanks for stopping by.